Looking in the rear view

Today marks 1 month since my faith was seriously tested. On January 27, 2020 around 7:30pm I was driving with my sister and three young children. We were rear ended and then we hit the van in front of us. I can still remember the  disoriented feeling, the sent of intense heat and fumes. I cringe and shutter every time I think about it because it’s so vivid in my mind.

I remember looking behind of me and seeing my 4-year-old face full of blood, my 3-year-old looked fine, and my 1-year-old’s rear facing carseat was slightly elevated and his legs were dangling up in the air a bit. I later found out he had a bruise and cut on his forehead.

I couldn’t get the door behind me open and as I frantically began to undo my kids’ carseat buckles, a panicked man furiously tried to pry the other backdoor open. When that didn’t work he banged the glass in attempts to free my baby boy but nothing. I eventually handed my daughters one by one to strangers who waited by the passenger door. I held on to my son.

We huddled in a ditch next to the wreck. There were so many people there, helping, coving my kids with blankets, PRAYING OVER US. My son began to go limp in my arms. From crying and clutching me tightly, his grip loosened and his eyes began to roll back into his head. I thought, no God, NOT MY SON. I prayed, that was the only thing I could do in such a helpless moment. Some of our rescuers began to join me and my son gained back his strength.

Shortly after that, the man we hit came over and began checking my kids. He was an EMT in training. He checked them for any signs of trauma to their neck, ribs, and stomach. There was none. I just remember feeling so grateful that when the police arrived and asked if we were ok, I walked off and began shouting, “In Jesus name we are fine. God is good!”

I didn’t feel fear in that moment. Nothing in the world seemed to matter. All I could think about was how blessed we were to be alive. Seeing the car and feeling like we were hit with an explosion, I knew it wasn’t anything short of a Miracle.

My faith kept me sane in the crucial moments after the crash. So many questions come up after seeing the car. There was a lot of impossible things that happened that night. 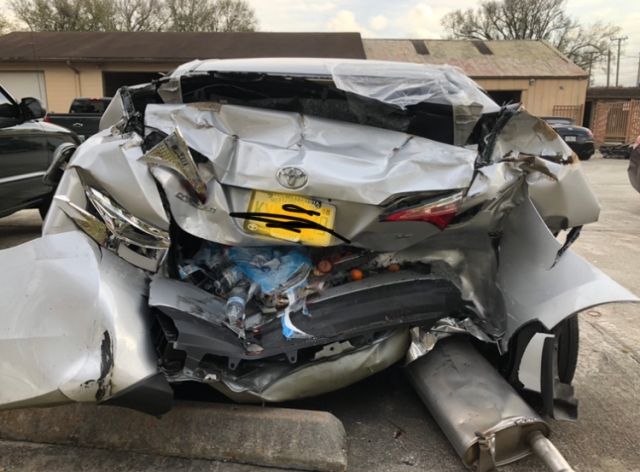 Check out photos of the car Here

Please drive safe and NEVER drive distracted. We were blessed to literally walk out of that car alive.

We are all doing okay. Driving now does get me anxious but I can’t be afraid of being behind the wheel or even in a vehicle. Mentally, I have to pray everyday about the crash because I am traumatized. It’s a lot more mentally taxing than I anticipated. You never get over the event.

Dena is an author, content creator, and designer. She has been writing for four years. Outside of writing, she spends her time making memories with her wonderful children. Her ultimate goal is to live for the Lord and make it known through her work and life.

2 thoughts on “Looking in the rear view”